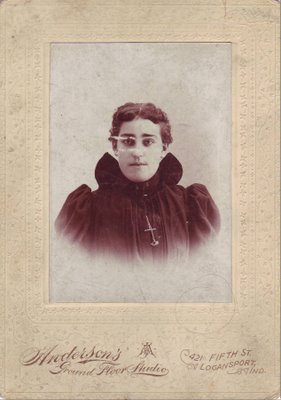 This is my great grandmother, Alice Laura Fitzgerald Lyon. She was mother to Velma Emily Lyon, my beloved grandmother and Betty Lyon Gaye, my great aunt. She was married to my dad's grandfather, Papa Steve. Alice had that mad Irish blood, I guess, some of which I think I may have also inherited. She was the daughter of Tobias Fitzgerald and Emma Balzell. She died of a self-inflicted shotgun wound. She spent most of her life in Logansport, Indiana.
Posted by pineyflatwoodsgirl at 11:57 PM No comments:

But, its been a good day today, anyway

Yes, it has been a good day in spite of worrying about the storm. I have a pile of new used books which I got at a book store I had never been to before ( a virgin bookstore?) which my friend Chandra led me to. We have probably talked a brilliant professor into teaching a folklore course in the Spring at night so we can go...I finished another writing job, I'm not worried about anyone at work... my son only wants me to call once a week... Linda and I are learning two new polkas, a new march and two hornpipes for the CD and an outdoor gig in November and the CD plans are coming along. And, I have a new hammock. ( The old one rotted and I dropped three feet to the ground on my back a while ago. Ouch! ) Oh, and while I was reading one of my new books about Sally Hemmings, the red shouldered hawks flew around me on Sunday. Plus I found old copies of Marjorie Kinnan Rawlings short stories at the book store. I promptly read the alligator story and I feel safer just doing so! It doesn't take much to make me happy...a good book and a hammock will do...
Posted by pineyflatwoodsgirl at 11:38 PM 1 comment: 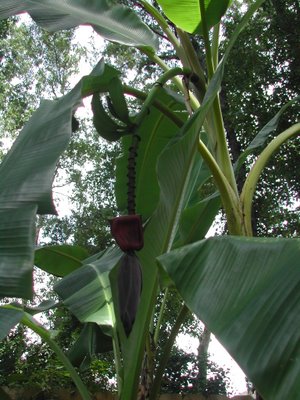 I now have four bananas on my plant. Hope they don't blow away this week...
Posted by pineyflatwoodsgirl at 6:32 PM 3 comments:

Batten down the hatches! 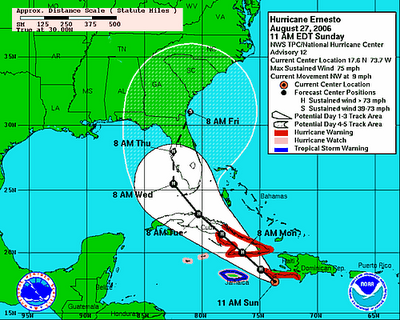 I'm just not ready for this! Daddy, you better call me...and my down south and eastward florida friends need to hunker down...Nathan, stay tuned....
Posted by pineyflatwoodsgirl at 11:55 AM 1 comment:

Canadian Geese: Up close and personal 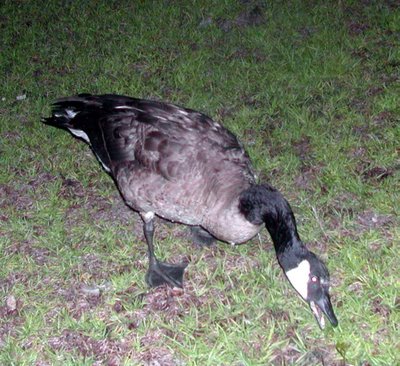 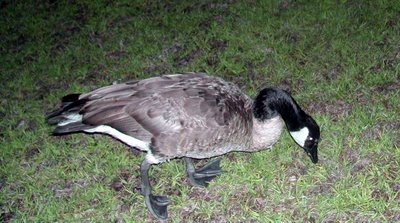 I rode back to the geese pond yesterday evening to feed the geese. When I was a wee one and we lived aboard our sailboats at the Detroit Yacht Club, I fed the mallard ducks every single day. We never had any leftover bread or crackers.

I realized I can feed the geese my leftover bread and I won't waste it, and I'll get my exercise... since it is really a three mile round trip to the pond . so I am going to make this a regular trip on my bicycle as I did last night. But if you really want to see some great bird pictures go to paddletales!
Posted by pineyflatwoodsgirl at 10:42 PM 2 comments: 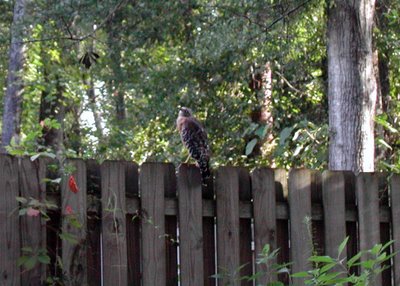 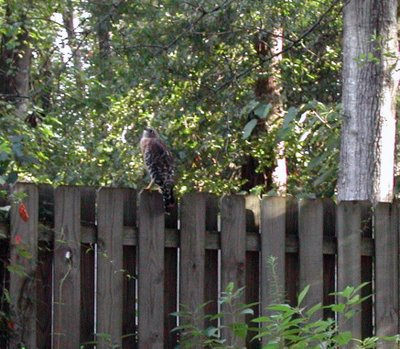 A pair of red shouldered hawks (I think that is what they are) live among the trees around my home. I think they like the fish in my pond, the many squirrels and the birds I feed and the possums and armadillos that dig in my yard. They are friendly and regularly land in my yard or sit on my fence. Here is one from this morning. A great thing to see in the morning before going to work.
Posted by pineyflatwoodsgirl at 9:11 AM No comments: 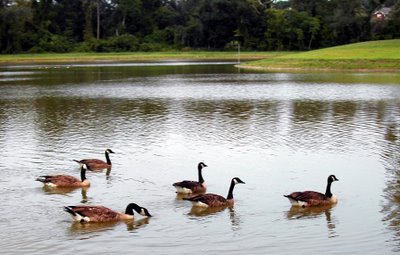 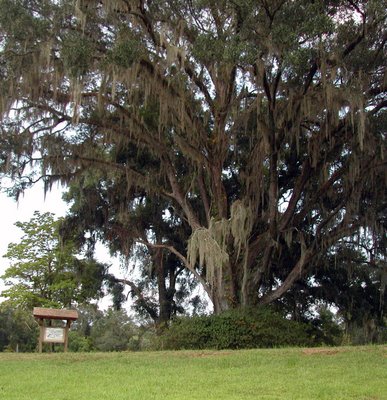 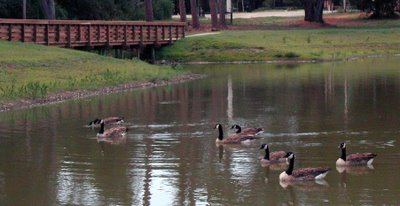 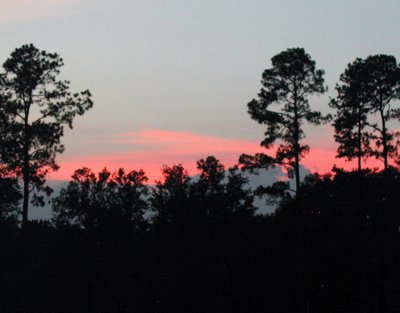 This pond is about a mile from my home and I wanted to walk it and to watch the Canadian Geese fly in at sunset. They fly in over the treetops like little bombers in V formation and land in groups of ten and twenty on this pond for the night. By the time it got really dark there were about one hundred and fifty geese tucked into the pond for the evening. They were honking and swimming about as the sun went down...
Posted by pineyflatwoodsgirl at 9:33 PM No comments: 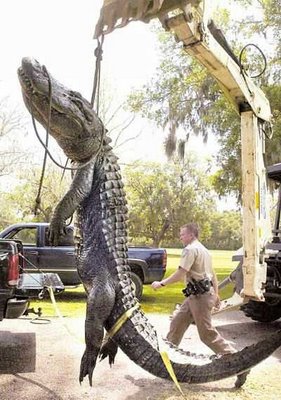 This gator was found in Texas. Maybe I should quit kayaking!
Posted by pineyflatwoodsgirl at 9:10 PM No comments: 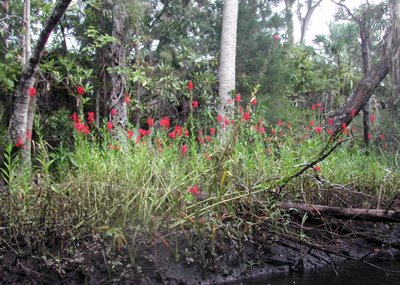 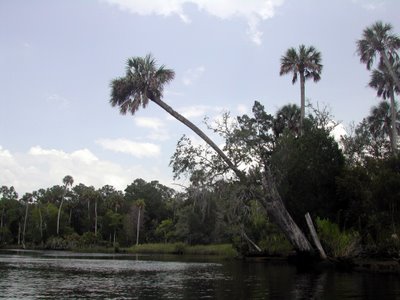 I wrestled all morning with my essay and having been housebound for too many weekends, I decided to slip out and visit the Econfina River. The state park is exactly fifty miles from my house and it only cost me about 13$ for gas down and back!

The Econfina is a river which is like a tidal creek really and it flows into the Gulf from the bottom of Taylor county at the end of highway 14. The launch is four dollars, on your honor and it is a misdemeanor to ignore the box!

Three alligators in the first five minutes suggested I would have an interesting trip but they did not bother me except for one doing a very loud bit of splashing! I kayaked down towards the gulf and took photos as I went.

The river widens considerably towards the gulf and the banks are alive with crabs scuttling about in waves as you pass by. Sea grasses line the banks and there are lots of sabal palms and cabbage palms along with dead trees of all shapes. There are also many limestone rocks submerged in the river and I ran right into one while trying to get a photo of some shrikes! Bump, scrape!

The river has these pretty red flowers in spots and I have seen them on the St. Marks River as well so they must like the brackish water. It stormed up while I was out and I turned around after a mile or so. The tide was coming in and I surfed up the river with no resistance at all to my paddles on the way back to the launch. It was the strongest tide I have noticed yet while kayaking except for Perdido Key under the bridge. That tide gave me a fight!

There are fishing shacks along the river, mostly stilt houses, as I'm sure the old timers have seen some big blows in this area this time of year.

I pulled the kayak into the truck just before a thunderstorm let loose and I jumped in the cab and made for home with a bit of satisfaction that the weekend ended well! But the essay still needs extensive rewrites and I may not turn it in on time! Channeling Marjorie Rawlings has so far not been working...
Posted by pineyflatwoodsgirl at 8:38 PM No comments: 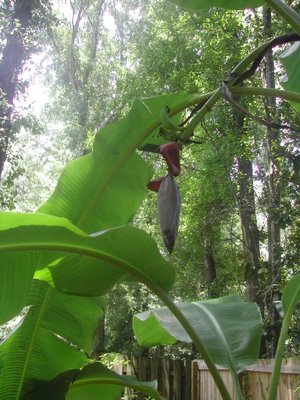 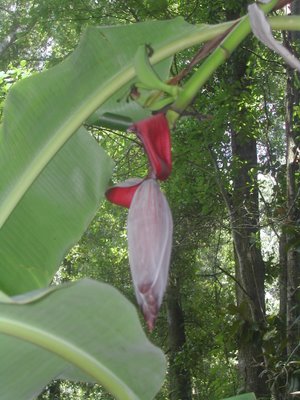 I wore myself plumb out, noodling on the banjo until after 2am so I am dawdling at my essay, which is entitled, " Political Portraiture: Semiotics, The Unconscious, and The Yellow Power Suit". I thus decided to photograph my first stalk of bananas. The dawning yellow will inspire me, I hope.

I planted this banana tree about five years ago. It was a gift from WAM, gardener extraordinaire. Now it is three distinct plants with the mother plant as you see here. I was afraid after conversing with Peggy about banana trees while kayaking Lake Munson a while back, that this was ornamental and not the fruiting kind of banana tree. As luck would have it, I spied a flower and a stalk this week.

I'll record its progress and I hope to get a bunch of mild sweet yellow bananas in a couple of weeks. The figs are all gone now and I am in need of more homegrown fruit.
Posted by pineyflatwoodsgirl at 2:30 PM 1 comment:

An old Harmony axe and the St. Clair house 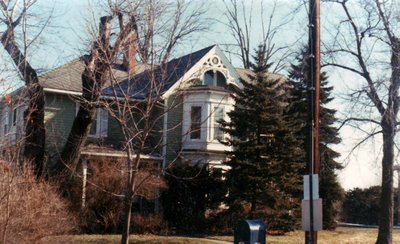 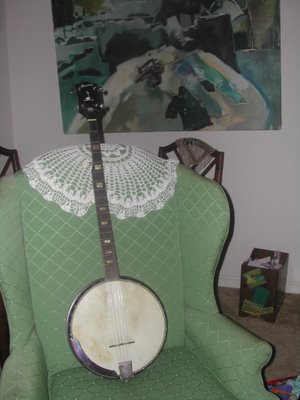 This is my old Harmony banjo. I found it in a yard sale in St. Clair, Michigan when I lived on the St. Clair River from June of 1986 until the following spring, when I left and returned to Florida.

I paid twenty five dollars for it, in 1986. A few years ago Nathan was walking through the living room and it was leaning against this chair. He kicked it over, by accident of course, and stepped on the neck and broke it. Easy to do when you have size fifteen feet!

Whitey Markle glued it back together and although it is no longer intact, it still sounds great!

In St. Clair, I lived in this old green Victorian house, which had been the home of the gardener of a larger estate. The big freighters went by, one after another, once the ice cutter came through in the spring, until late in the year. I'd watched the big freighters all my life as a child, when we lived on the Detroit River. It was the best thing about that fall.

There was a salt mine down at the bottom of the hill. The semis used to haul salt up the hill all night until five am and grind through their lower gears. The old house was one hundred and twenty years old and it would sway when the trucks rolled by. I think it was torn down and they put up condos after I moved away. We had an old chestnut tree in the front yard. People came and collected the chestnuts when it got cold.

The old house had a coal shute and an old furnace that was a boiler. It was hard to light. It was a difficult house to live in. Couldn't get the washing machine to fill up or any water pressure in the shower. It was thirty nine degrees in September and the boiler broke down. The furnace man refused to repair it, saying it would probably blow up if he tinkered with it anymore. Even though I had it replaced, it was a very miserable winter with the radiators clanking and the house swaying from the salt trucks. I slept about three hours total that winter... I returned to Florida in the spring and I was so glad to be home again...

The picture behind it is called Will's Clothes. It was painted by Brian Bryson. Will was a drummer and he had taken off his clothes and laid them on a rock to swim, somewhere in South America.

Posted by pineyflatwoodsgirl at 9:37 PM No comments:

pineyflatwoodsgirl
"A foolish faith in authority is the worst enemy of truth." Albert Einstein, 1901